Friday, April 13th was the first occasion that I had ever been in the Space Theatre at the Denver Center for the Performing Arts, and the introduction to this theatre-in-the-round couldn’t have been better.

“A bright, witty, and clever comedy”

Native Gardens is a delightful play written by Karen Zacarias about a Latinx couple that move into a fixer-upper right in the middle of an established D.C. neighborhood. Although they do their very best to get along with their white, older neighbors, everything melts down when they realize that their property line actually extends right through their neighbors’ backyard. In a clear culture-clash, what could have been a simple disagreement turns into an all-out border dispute over more than just a fence and a garden.

Right in the middle…

Throughout the play, the audience gets to know four characters who have so much in common, yet continue to butt heads and can’t find their common ground. They comment on everything from entitlement and race, to class and sexism. We were pulled back and forth throughout the whole performance, knowing that each of the characters were right in some form, but digging in their heels instead of opening up to a different perspective. Our vantage point also made us really feel like we were right in the middle of the action (real dirt, real flowers, and all).

My partner-in-crime for the evening is from Argentina, and although intrigued by the premise, had expressed some valid concerns before we walked in. “I was worried that it would be stereotype after stereotype. I was relieved that it was as well-written as it was, and especially relevant.” We both thoroughly enjoyed the fast-paced, witty dialogue full of delicious puns (who doesn’t like a perfect pun?) and one-liners.

I was fortunate enough to have had the chance to attend the Cast Creative Perspectives before Opening Night. The DCPA organizes Perspectives before the opening of every DCPA Theatre Company show, giving attendees a chance to meet with the cast, the creative directors of the production, and in this case, the playwright (a big treat!).

“Gardening is a really fun metaphor to talk about much harder issues like class, race, and ageism.”- Karen Zacarias

Written before the 2016 election, Native Gardens is incredibly popular and performed across the nation. On the topic of why the play is so relevant and timely, “I feel the reason this play is being done in so many cities right now is because it gives your community, whether you are on the left or the right, a chance to laugh at yourself and remember that we are all part of a bigger microcosm,” Mrs. Zacarias said. “This play doesn’t solve all the world’s problems, but it does allow us to analyze what we can do to be a better neighbor — which is a question I think a lot of us are wrestling with right now.”

Playing until May 6th, you can still buy tickets here! 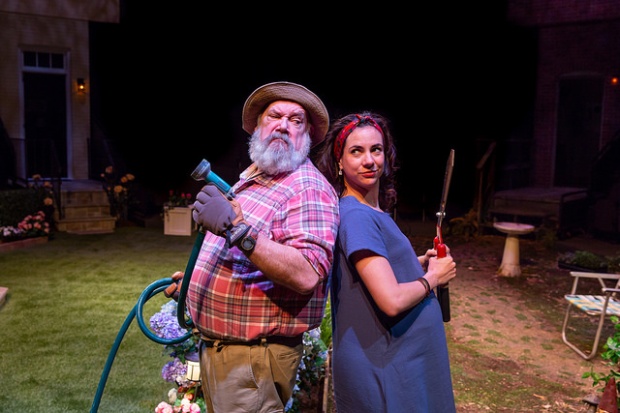 John Ahlin and Mariana Fernández at the Space Theatre. Photos by Adams VisCom for the DCPA NewsCenter.

thank you for your support!

I may receive commissions from clicks or purchases made through links on this blog, at no cost to you.

Purchasing through affiliate links is an easy, painless way to help out your favorite bloggers. Thank you so much for your continued support!